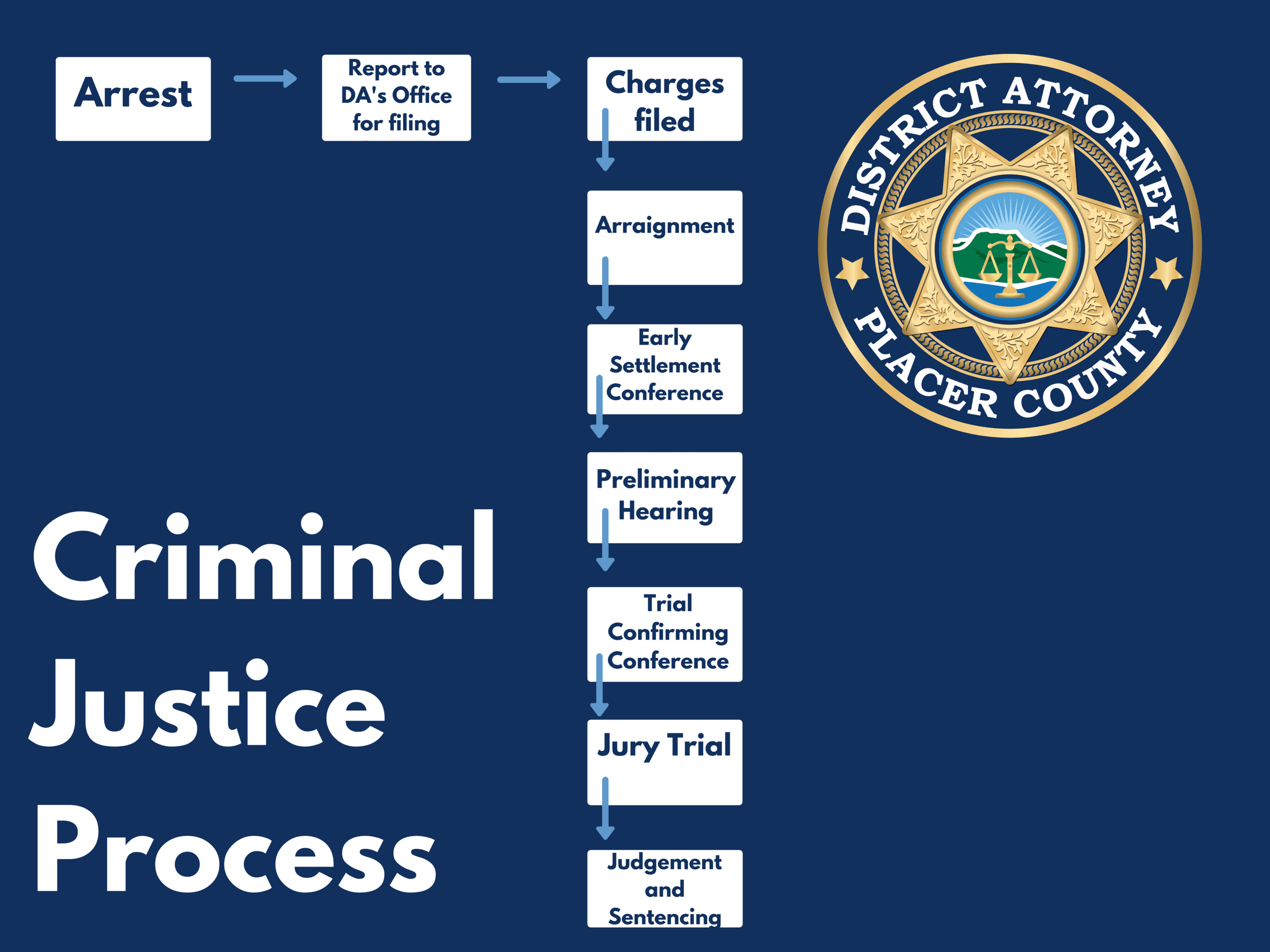 PARTIES TO THE CRIMINAL JUSTICE PROCESS

COURT CLERK Person who assists the judge by documenting court orders, administering the “oath” to witnesses before they testify, etc.

COURT REPORTER Person who documents everything that is said by using a special transcribing machine, while court is in session and on the record, creating a court transcript

CRIMINAL JUSTICE VICTIM ADVOCATE A person who is trained in the criminal justice process and supports and assists victims with understanding their rights and provides resources: Information and Referral; Advocacy and Support; Emotional Support or Safety Services; Shelter/Housing Services; Criminal Justice Assistance

DEFENDANT Person who has been charged with committing a crime

INMATE Person who is suspected of or convicted of committing a crime, who is in custody

JUDGE (Your Honor or The Court)

The Judge cannot charge or decline to charge a case, only the DA can do that. However, the judge can determine there is not sufficient evidence to prove the case, and either reduce the charges to a lower level (Felony to Misdemeanor) or dismiss the case after it has been filed, if they feel the prosecution has not met their burden of proof beyond a reasonable doubt

JURY individuals from our community who are charged with determining if a crime happened based on the evidence presented at trial. There are 12 jurors. Alternate jurors are selected to fill in if one of the other 12 jurors falls ill or is no longer able to remain on the jury panel

VICTIM Person who has been victimized (in the eyes of the law) because of a crime. The victim does NOT have the authority to “press charges” though they are often asked how they feel about charges being “Pressed” or filed

ARREST A suspect can be arrested on suspicion of committing a crime. Arrests can be made based on law enforcements standard of probable cause, meaning it is reasonable to believe the suspect probably committed the crime (this is a much lower standard than the prosecutor has when charging a case)

BAIL When a suspect is put in custody (jail), bail is attached to their release.   The bail amount is based on the charges or type of crime the suspect was arrested on (often those charges can change once the prosecutor receives additional information from the investigation). Bail or charges could also change at a later point in the case, after the receipt of information (mitigating or aggravating) from the additional investigation, or if the Judge believes the prosecutor does not have enough evidence

BURDEN OF PROOF STANDARD The obligation to prove one’s assertion.  In Criminal court the burden of proof is beyond a reasonable doubt, meaning beyond dispute that any reasonable alternative is possible.   In civil cases, proof by preponderance of the evidence must be greater than 50%.

CUSTODY When a suspect is being held in custody at a local jail (The prosecutor will need to determine charges within 48 hours). If the prosecutor is not able to make a charging decision by the required timeframe, they can notify the jail to release the suspect pending further investigation while waiting for additional evidence

DISCOVERY Evidence received and duplicated to share with the defense and sometimes the prosecution (typically includes police reports, photographs, recordings, etc.) Evidence can be aggravating (to make the case stronger) or mitigating (to lessen consequences), either way, the prosecutor must duplicate and share with the defense.  *The defense does not have the same obligation

EVIDENCE Information obtained by law enforcement during their investigation and by search warrants or subpoenaed records.  The DA’s office receives evidence or witness statements through law enforcement agencies.  It is important to note that the victims/witnesses cannot provide the information directly to the DA staff due to a strict chain of evidence rules for the court process.   Anyone who receives evidence could become a potential witness.

*Domestic Violence Restraining Orders are sought by individuals who are in a relationship and request the other party to be restrained.

*Emergency Protective Order (EPO)- initiated by law enforcement or the prosecutor/judge) and issued when law enforcement is called to a scene, typically for domestic violence (this order has a very small amount of time from it being ordered to it expiring)

*Criminal Protective Order (CPO)- issued in all Domestic Violence cases and will remain until the completion of the criminal proceedings, sometimes longer depending on the type of crime

Once an attorney has agreed to represent the defendant, the prosecutor will share the initial discovery (evidence including police reports, witness statements, 911 calls, photos, lab tests, etc.).   Discovery continues to be shared throughout the criminal justice process between the attorneys and the defendant.   To maintain the integrity of the case, discovery may not be distributed to anyone else.

The court will want to know if the defendant would like to enter time waivers within 10 calendar days or a trial within 60 calendar days.  A defendant could waive the 10 day, but not the 60, or waive both the 10 and 60 or not waive time at all, in which case, preliminary hearing will be set. Often after the defense attorney reviews the initial discovery, they will have a more informed conversation with their client and advise them on how they should proceed leading to time waivers continuing as set or a change in entry of time waivers.

During most arraignment hearings, the defendant will enter a plea of Not Guilty- Even in cases where they may have previously admitted guilt.  This is to allow time to review the charges and evidence with their defense attorney.

PLEA AGREEMENT- A plea agreement is negotiated between the prosecutor and the defense, who have arrived at an agreement for a punishment without the need for trial.  A judge must authorize the agreement.

**MARSY’S RIGHT- the victim has the right to appearance at court proceedings and expression of views: As a victim, you have the right to be heard, upon request, at any proceeding, including any post-arrest release decision, plea, sentencing, post-conviction release decision or at any proceeding in which a right of the victim is at issue.  As a victim, you may make a statement to the court/Judge, regarding the defendant’s custody status/bail. This statement is a request for the court to take into consideration your safety, and the safety of the community should the defendant be released from custody or if they are already out of custody, request the court to review and/or place additional restrictions on their release, such as supervised OR (own recognizances) having a probation officer monitor their release, be subject to search and seizure, ankle monitoring, protective order, etc. (This statement is not a statement of evidence or a trial, it is limited to the safety of the victim and community pending the criminal proceedings).  Your victim advocate can assist you on preparing your statement.

EARLY SETTLEMENT/STATUS CONFERENCE (ESC)- There could be several of these hearings during the criminal justice process.  An ESC is a “check in” with the court to look over discovery and work through the negotiation process.  The judge will inquire as to the status and a future court date will be set.  The defendant is not always required to be present at an ESC and their attorney can appear on their behalf.  It is possible for cases to resolve or parties to reach an agreement during an ESC hearing.  This would be considered an early resolution.

**MARSY’S RIGHT- the victim has the right to be notified of and present at all public proceedings: Let your advocate know if you wish to be present at each hearing or updated via phone or email.

PRELIMINARY HEARING (PX) – Witnesses/Victims are generally excluded from being in court during these proceedings, unless subpoenaed to testify, then only allowed to be present during the time of their testimony.

This is the first significant court hearing after the arraignment and is often thought of as a “mini trial”.  The prosecutor must prove to the court that they have alleged proper charges based on the evidence presented.  If the prosecutor is successful in proof then the defendant will be held to answer, meaning they will be held over for trial.   However, if a judge determines that the prosecutor did not meet their burden of proof, then the judge can reduce the charges from a felony to a misdemeanor or dismiss the case altogether.

When the prosecutor is successful at the preliminary hearing, the next step is for the prosecutor to file another document with the court, like a complaint, that alleges the charges the court-approved at the PX.  This document is called "the information".

**MARSY’S RIGHT- the victim has the right to make a bail statement:  Because this could be considered a “change in circumstance” the victim could readdress the court regarding “bail”.

Following the Arraignment on Information hearing, the next court appearances focus on trial dates and confirm the attorneys agree with the timing of the trial dates.  There could be more than one TCC as attorneys are still negotiating prior to the start of trial.

Trial can be in the form of a jury made up of twelve members from the community or a bench trial where only the judge hears the evidence and decides.  At the beginning of the process, the attorneys will litigate what information will be admitted or excluded.  Depending on the crime, this could be a very short process or take several weeks depending on the severity of the punishment the defendent faces.

To meet their burden, the prosecutor MUST convince all 12 jurors that the defendant committed the crime beyond a reasonable doubt.  There are several types of verdicts but the most common are Guilty or Guilty by Reason of Insanity.

If the prosecutor is not successful, the following could occur:  Acquittal or a Not Guilty Verdict. All 12 jurors did not believe the prosecutor met their burden.  If a case ends in an acquittal then that is the end of the case.  Hung Jury: A hung jury occurs If the prosecutor convinces some, but not all 12 jurors, there could be a split and the prosecutor can attempt again to prove the crime, or retry the case, but would have to start the entire process over again.

Once convicted at trial or if the defendant plead in a felony criminal case, the last hearing that will conclude the case is called a Judgement and Sentencing hearing.  A judge must impose a sentence that is sufficient, but not greater than necessary, to reflect the seriousness of the offense; adequately deter criminal conduct; and protect the public from further crimes by the defendant.