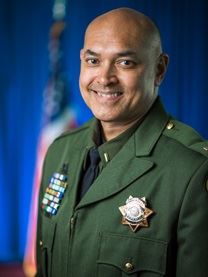 Captain Jeff Swearingen began his career with the Placer County Sheriff’s Office in corrections in 1997, before being sent to the academy as a deputy sheriff trainee in 1999.

He has worked in corrections, transportation, patrol, and as a school resource officer before he was promoted to the rank of sergeant. Swearingen was a member of the Special Enforcement Team (SET) for 10 years and was the assistant team leader. He was sergeant in the Crimes Against Persons unit before promoting to lieutenant, and was then assigned to corrections.

Swearingen is a graduate of San Juan High School, hold a bachelor’s degree in Criminal Justice Management and is a graduate of the FBI National Academy. When he’s not working, he likes to run and golf. He is married and has a son and two stepsons.