Supervising Deputy District Attorney Doug Van Breemen was awarded today with the “Community Hero Award” from Mothers Against Drunk Driving (MADD) at their annual luncheon in Sacramento. The nomination for the award was made by the surviving family members of 26-year-old Gregory De La Campa who was killed by a drunk driver, Oleg Tarasuk, on August 14, 2012. Mr. Tarasuk had fled the scene of a traffic stop by Roseville Police Department and in doing so struck and killed the victim as he waited to cross the intersection. Mr. Van Breemen sought a murder conviction based on the defendant’s prior DUI history and his reckless behavior that ultimately resulted in the death of Mr. De La Campa. Mr. Tarasuk was convicted of the second degree murder charge and was sentenced to 43 years to life in state prison.

District Attorney Investigator Vince Dutto was also honored with the award by MADD for his investigation of the Tarasuk case while employed as a Detective of the Roseville Police Department. In addition to the Tarasuk investigation, Mr. Dutto, in his new assignment as Investigator for the Placer County District Attorney’s Office investigated the case of Shawn Melvin Olsen. Mr. Olsen was arrested for a DUI resulting in the death of Raeleigh Julei Rhodes. Investigator Dutto suspected that the death may have been intentional. Mr. Dutto’s investigation confirmed that the actions of the defendant were in fact intentional. He was ultimately convicted of voluntary manslaughter in the case and received a sentence of 13 years and 8 months in state prison.

Placer County District Attorney Scott Owens applauded MADD for their tireless work in seeking justice for victims of drunk drivers and expressed pride in Mr. Van Breemen for his work not only on this case, but in his day to day supervision of our DUI Unit. He is not only a respected member of our office, but he is highly respected by law enforcement for his aggressive and relentless pursuit of justice. Those who work at the DA’s office know of the long hours that he puts in to assure that his cases and the cases of those he supervises are aggressively prosecuted. Doug’s humble and measured approach to criminal prosecution makes him appear surprisingly adversarial when he is in trial fighting for justice for the victims and their families, as was seen by those who watched him prosecute Mr. Tarasuk. I am proud that he is receiving the recognition that he deserves and has earned during his years as a prosecutor.

District Attorney Owens was also pleased that MADD recognized the devotion and hard work of Vince Dutto on these cases. What is clear is that without the passion, skill, and intelligence of Investigator Dutto these successful prosecutions would not have happened and the families of these victims would not have received justice. I am proud that we have such an elite Investigator in our office and that he is an integral part of a team of individuals who work hand in hand to assure that the truth is known and justice is achieved for families of victims. Our County is blessed to have such exemplary prosecutors and investigators like Mr. Van Breemen and Mr. Dutto. 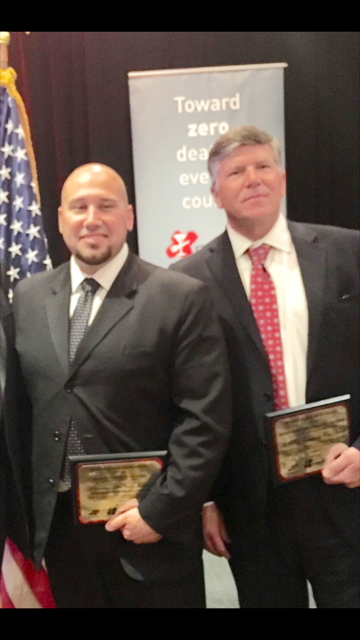