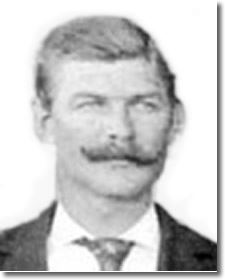 On February 20, 1928 the Placer County Sheriff’s Office lost one of its most famous law men when Deputy Frank H. “Big Dip” Dependener was killed in a traffic accident while returning from a raid on an illegal liquor operation in the Roseville area. The vehicle in which Big Dip was a passenger collided with another vehicle and rolled down a 25-foot embankment, coming to rest upside down. Big Dip suffered a broken neck and died instantly. Placer County Sheriff Elmer Gum and Loomis Constable A.A. Pillard, who were also in the vehicle, suffered major injuries but survived.

Big Dip’s funeral was one of the largest ever held in Placer County and was attended by individuals from all over California.

A friend and colleague, Sacramento Police Captain Ed Brown, described him as “one of the best- known, best-liked and most feared men in public service.”

At 6-feet, 7-inches tall, Big Dip was the tallest man in the county. His imposing size and sheer strength were qualifications enough for being appointed a deputy sheriff in 1891 when he was just 21. He stayed on as a deputy for the next 37 years, through the administration of four sheriffs.

Big Dip was never far from the action himself, and never afraid to wade into trouble. After his death, the Auburn Journal reported, “Dependener was said to have been wounded at least seven times by bullets, and to have borne about thirty marks inflicted by hostile criminals with weapons of various kinds.”

During the long and illustrious career of this great law man, if a crime of any consequence occurred in Placer County, you would almost have to assume that Big Dip would be involved.

The Texas Rangers pride themselves in sending one Texas Ranger to handle one riot. The Placer County Sheriff’s Office had their own “one man gang,” Deputy Frank H. “Big Dip” Dependener.

Deputy Dependener was a widower. He was survived by his two daughters.