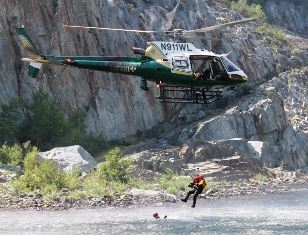 The Placer County Sheriff's Office provides air support services throughout the county. The Air Support Unit’s aircraft consists of Falcon 30 and Eagle 2. Falcon 30 is an American Eurocopter AS 350 B3 AStar, a five-seat helicopter (as configured, capable of seating six.) Powered by an 871 HP Turbomeca Arriel-2B1 turbine engine, Falcon 30’s response speed is approximately 135 miles per hour, service ceiling is 20,000 feet, range is approximately 250 miles and typical endurance can be over 3 hours.

Watch a training video on our helicopter.

System Operator has the following duties:

Rescue Specialist has the following duties:

Falcon 30 is equipped with a modern avionics package:

Falcon 30 is named after Sacramento Police Officer Bill Bean, a former Placer County deputy sheriff. Bill was killed in the line of duty on February 9, 1999, in a Sacramento shooting. Bill was a star football player for the Colfax Falcons and grew up in Placer County. His jersey number was 30. Bill was an inspiration to all who knew him.

Falcon 30’s FAA tail number (N911WL) is also very significant. 911 is in tribute to the lives lost on September 11, 2001. W honors Deputy Paul ‘Woody’ Woodruff, the first Placer County Sheriff’s Office helicopter pilot and one of the original members and initial Chief Pilot of the helicopter program. Woody was killed in a civilian helicopter training accident on April 10, 2003. L is in memory of Chief Warrant Officer-Five Arthur ‘Art’ Laguna, who also flew as a volunteer pilot for Placer County. While flying security protection for U.S. diplomats in Iraq, Art was killed when his helicopter was shot down on January 27, 2007. Woody and Art both contributed immeasurably to the Placer County Air Support Unit and will never be forgotten.

Falcon 30's primary purpose is to provide air support and backup for the deputies on the ground, hence the motto, “Protection from Above.” This is accomplished through responding to backup deputies, providing

Eagle 2 is our fixed wing partner in the Air Support Unit. Eagle 2 is a Piper Navajo twin, capable of long distance, high-speed travel. The primary mission of Eagle 2 is the transportation of prisoners, department administration and other county personnel within California and the western states. Eagle 2 has a modernized avionics glass cockpit and has provided reliable service to our agency for well over two decades.